Was the Flood the First Time It Rained? 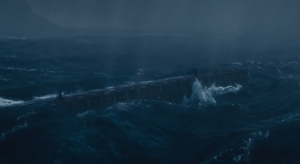 Along with my question about dinosaurs, I have a second question. It has to do with your understanding of the climate as it is spoken of in Genesis. Most people in my congregation that have grown up in church all assume that rain came for the first time at the flood. Is this what the Bible teaches?

Your people are asking good questions, and again I hope that I can offer some clarity.

1. Rain Likely Started Soon after Genesis 3, If Not before

The biblical text would suggest it very unlikely that Noah’s flood brought the first rains on the earth. Genesis 2:5–7 reads,

When no bush of the field was yet in the land and no small plant of the field had yet sprung up––for the LORD God had not caused it to rain on the land, and there was no man to work the ground, and a mist was going up from the land was watering the whole face of the ground––then the LORD God formed the man.

In my view, these verses are declaring to readers that the world we know post fall was not yet being experienced. The statement, “There was no man to work the ground” (Genesis 2:5), anticipates the judgment in Genesis 3:23: “Therefore the LORD God sent him out from the garden of Eden to work the ground from which he was taken.” Similarly, the language of “field” (2x in Genesis 2:5) anticipates Genesis 3:18: “Thorns and thistles it shall bring forth for you; and you shall eat the plants of the field” (cf. 2:19). Finally, the term “bush” is used elsewhere for desert plants (see Genesis 21:15; Job 30:4, 7). All of this suggests that the purpose of these verses was simply to say, “The account I am about to give is pre-fall and pre-curse.” The world after this time, however, would have included the rain, for that was a key means for growing the plants that mankind would cultivate.

2. The Account of No Rain May Also Point to Creation Occurring in the Dry Season.

Another note that seems reasonable is that the biblical author is not only commenting on the fact that the fall had not yet happened but is also noting the time of year in the Middle East that the creation occurred. That is, it occurred during the dry season (May/June–Aug/Sept), preceding the early autumn rains. The weather patterns in the Middle East are quite established, and it is possible that they followed the same patterns prior to the flood (see my What the Old Testament Authors Really Cared About, Fig. 4.5 on p. 114):

3. The Flood Narrative Highlights the Duration of the Rain, Not Its Presence.

Finally, what becomes significant in the flood judgment is not the rain itself but that it would last for so long. The first 40 days and nights would raise the ark off the ground, and then the remaining days up to the total 150 would result in, I believe, a global catastrophe that included water covering even the highest mountain (7:19).

Along with the text’s stress that “all flesh” and not just humans were being punished in the flood (Genesis 6:12–13; 7:21; see here, point 3), the global rather than regional nature of the cataclysm is highlighted through the stress on saving the birds by preserving them on the ark (Genesis 6:7, 19–20; 7:3, 8, 14, 21–23). They could have simply flown over the next hill if the flood was regional and had indeed not “prevailed so mightily on the earth that all the high mountains under the whole heaven were covered” (Genesis 7:19).

I see no reason to think that the rain that produced the flood (along with “the fountains of the great deep” [Genesis 7:11; 8:2]) was the first rain to fall on the earth.