What Happened to the Dinosaurs? 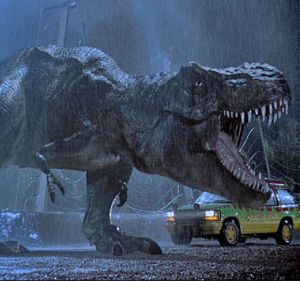 We are currently doing a study of the story of Noah and the flood in our adult Sunday School class in light of the upcoming movie being released. We have not been going verse by verse in this study instead we have been looking at the story theologically and apologetically. We have sought to answer objections that might be raised by critics from outside the church and from within the church. We have also sought to challenge possible misconceptions about the text. As a father I am sure you have been asked on more than one occasion by your children about Dinosaurs. It is also a question that people within the church and in the culture are curious about. How have you sought to give direction to people when they have asked you questions about Dinosaurs?

Your people have asked a good question, and I hope that I can offer a little help.

1. Dinosaurs and Humans Appear to Have Co-Existed Peacefully before the Fall.

While naturalistic evolutionists normally posit at least five ice ages that progressively killed off the dinosaurs well before humanity every arrived on the scene, the plain reading of the biblical text would suggest otherwise––mankind was created alongside the sea creatures and land animals (Genesis 1:20–25 with Genesis 1:26–28; 2:19), which would imply that humans and dinosaurs co-existed in the earliest days. Even if, as any old earth model demands, there was animal death and suffering before the fall, it is clear that the diet of the animals did not include humans prior to Genesis 3. That is, dinosaurs would not have been a danger to humans prior to the fall, for every creature knew its place under God’s right order of sovereign rest (Genesis 2:1–3; cf. Psalm 132:7–8, 13–14). In this order, humans had been placed at the top of the food change, called by God to serve as agents of his oversight, control, provision, and protection of the world, including the animal kingdom (Genesis 1:28; 2:15; Psalm 8:6–8[7–9]). A breakdown of various texts is as follows:

2. The Threat of Animals Hurting Humans Is Part of the Curse.

In light of these, it seems most likely that it was the fall of Genesis 3 that unleashed against humans a torrent of beastly, “Jurassic Park”-like activity––activity that God appears to deem violent and wrong, for it puts the preservation of his image on earth in jeopardy. This is seen most clearly in Genesis 6–9.

3. The Flood Judgment Appears to Have Been Partially Due to Animal Violence against Humans.

It is most likely the corrupt, beastly predation of animals against humans that, along with human sin, brought about the flood judgment. Notice how Genesis 6 addresses the reason for the flood. While humanity, as head of creation, led the atrocities (i.e., “the wickedness of man was great in the earth,” Genesis 6:5), the flood was brought about by “all flesh” that “had corrupted their way on the earth” (Genesis 6:12). Therefore, God said to Noah, “I have determined to make an end of all flesh, for the earth is filled with violence through them” (Genesis 6:13). The rest of the chapter and the next make clear what all flesh is:

The flood was brought about not only because of the violence and wickedness of mankind but also because of the violence of the animals. Because the term “violence” is elsewhere restricted to human violence against humans (the only potential exception is Jonah 3:8) and because predatory activity between animals is elsewhere not viewed as a problem but rather God’s good order (Psalm 104:21; Job 38:39–41), it seems likely the animal violence that is condemned is likely that against humans. Human deaths due to animal predation appear to have been an increasing problem since the fall, when the animal kingdom was cursed along with the serpent (though he “above/more than” all other beasts, Genesis 3:14). This explains why only after the flood does God change humanity’s diet, so that animals might begin to fear people: “The fear of you and the dread of you shall be upon every beast of the earth and upon every bird of the heavens, upon everything that creeps on the ground and all the fish of the sea. It you hand they are delivered. Every moving thing that lives shall be food for you. And as I gave you the green plants, I give you everything” (Genesis 9:2–3). Such a move has a direct connection to the preservation of the image of God in humans: “And for your lifeblood I will require a reckoning: from every beast I will require it. . . . Whoever sheds the blood of man, by man shall his blood be shed, for God made man in his image” (Genesis 6:5–6).

4. Dinosaurs Probably Became Extinct Due to Destruction by Humans and/or to Climate Change.

All of this sets us up for the departure of dinosaurs. It seems likely to me that they were part of the problem that sparked the need for the flood, but I see no reason why they would not have been preserved along with all other air-breathing creatures on the ark. As such, while the Bible is not explicit, it seems most likely their extinction happened after the flood due to one of two factors:

We know the flood was caused not only by rain but also, and even more significantly, when “the fountains of the great deep burst forth” (Genesis 6:11; 8:2; cf. Amos 9:6; Proverbs 8:28). This suggests high volcanic activity, which would increase the temperature of the waters and in turn drastically alter the earth’s climate (for a popular-level, contemporary example, see the movie “The Day After Tomorrow”). The eradication and extinction of the dinosaurs may have occurred progressively and perhaps even over a long-period of time (see the accounts on multiple continents of St. George’s dragon in the Middle Ages).