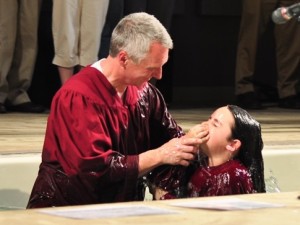 In my own walk of faith, God led me on a ten-year journey before I became a convinced credo Baptist. Ultimately, it was biblical theology that finally pushed me over the fence, and in the following presentation I expound some of the biblical-theological arguments that led me in this direction. The presentation is titled “Father of a Multitude: New Covenant Ecclesiology in Old Testament Perspective,” and a version of the study will show up under the same title in a forthcoming collection edited by Stephen J. Wellum and Brent A. Parker titled Progressive Covenantalism: Charting a Mediating Position Between Dispensational and Covenant Theologies (Nashville: Broadman & Holman, 2015). An expanded version will also appear in JETS 58.3 (2015) under the title “Counting Stars with Abraham and the Prophets: New Covenant Ecclesiology in Old Testament Perspective.”

My thesis: The NT’s application of “seed” language to both Jews and Gentiles in Christ fulfills OT hopes for the fulfillment of Abraham’s fatherhood of a multitude of nations through the messianic king and supports a progressive covenantal flavor of baptistic new covenant ecclesiology. I gave this presentation on March 26, 2015, at Southeastern Baptist Theological Seminary as part of their PhD Colloquium Series. I am grateful to all who were present and offered helpful feedback.