Endorsement: AGAINST THE GODS 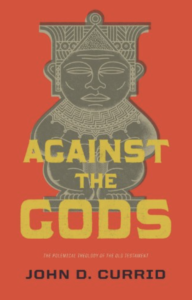 Currid, John D. Against the Gods: The Polemical Theology of the Old Testament. Wheaton, IL: Crossway, 2013. 150 pages.
Co-editor of Crossway’s new ESV Archaeology Study Bible, Dr. John Currid is Carl W. McMurray Professor of Old Testament at Reformed Theological Seminary. His book Against the Gods is an excellent example of solid, evangelical comparative study that identifies both the similarities and differences of biblical materials to other ancient Near Eastern texts and by this identifies how God often used the biblical authors to confront pagan worldviews and practices. His work stands against a prevailing voice among professing evangelicals that the Bible regularly simply borrowed thoughts and customs from their pagan neighbors with little discrimination. Below you will find my extended endorsement, the publisher’s description, and the Table of Contents.

The Old Testament addressed an ancient context that was filled with perspectives, powers, and practices sometimes like but often unlike those of our western world. A rising influential voice, even within evangelical circles, is asserting that the biblical worldview, while monotheistic, often parallels and at times pirates with minimal discrimination the pre-enlightened religious ideas and rituals of ancient Israel’s neighbors. In contrast, by affirming the Old Testament’s historical reliability and by showing the need to assess not only similarities but also differences with comparative ancient accounts, John Currid persuasively demonstrates in Against the Gods that the Bible’s tendency is not to appropriate but to dispute and repudiate pagan myths, ideas, identities, and customs by establishing the authentic, original historical event that had been vulgarized and distorted through polytheism, magic, violence, and paganism or by showing that what was myth in the ancient world had become real and factual in Israel’s time and history. Loaded with examples and clearly written commentary that respects the nature of God’s Word, this important introduction to Old Testament polemical theology provides a balanced corrective to many current comparative studies.

Did Moses borrow ideas from his cultural neighbors when he wrote the Pentateuch? Scholars disagree on the relationship between portions of the Old Testament and similar ancient Near Eastern accounts. Following in the footsteps of higher critics, some evangelical scholars now argue that Moses drew significantly from the worldview of his pagan contemporaries. Respected Old Testament scholar John Currid, however, pushes back against this trend by highlighting the highly polemical nature of Moses’ writings. From the Genesis creation account to the story of Israel’s exodus from Egypt, Currid shows how the biblical author’s continually emphasized the futility of paganism in contrast with the unparalleled worldview of the Hebrews. Currid’s penetrating analysis and thoughtful argumentation make this a ground-breaking resource for anyone interested in this ongoing discussion.