An Exceptional Documentary on the Exodus 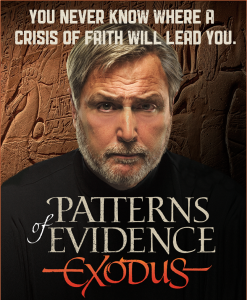 I strongly encourage you to watch the forthcoming two-hour documentary titled “Patterns of Evidence: Exodus.” It will show in select cinemas across the country next Monday night only, January 19, unless a great turnout opens the door for another showing. I previewed this exceptional movie with my family just before Christmas, and I was very encouraged, and all were captivated.

The piece has been a decade in the making, was put together by evangelicals, and presents the evidence for a factual exodus in an compelling way. They interview major scholars from evangelical, conservative, and liberal camps, honestly noting the chronological challenges and progressively building some patterns of evidence for the exodus. Israel Finkelstein, David Rhol, Benjamin Netanyahu, James Hoffmeier, John Bimson, Bryant Wood, and Charles Aling are just some of the many scholars interviewed.

By the end of the movie, one is left awed that some scholars assert that there is no extra-biblical support for the claims documented in Scripture. The film handles the data fairly and at the end offers a minority-voice proposal that has caused the leaders on all sides of the issue to reconsider the data. The documentary has had great success in the film festivals, and I do believe it will edify your faith and challenge critics to reconsider the truths of Scripture.

As for specific conclusions, the film argues that the 13th century date is too late, that 1446 is to be preferred as taught in the Bible, and that Egyptian chronology/ANE archaeology may need to be reassessed in light of the patterns of evidence that presently do not all line up but that could, all around the 1446 date. The latter proposal comes only at the end. Most of the movie is made up of noting the various patterns of evidence that all sound like the exodus and conquest but occur at different times in light of present chronological schemas.

You can go to “Patters of Evidence: Exodus” to purchase tickets or to see a trailer. Again, the movie is only showing Monday evening, January 19. Pre-show starts at 6:30 and the film at 7:00 pm.

TO SEE A FILM TRAILER AND LEARN MORE